While in Yosemite Park, I visited the Ansel Adams gallery and discovered that they run a half-day photography course open to anyone. I paid them $95 and signed up for the following day. The planning was that I was going to do about a third of the marsh walk with Penny and Antonia and they would leave me in the Valley for the latter half of the day and meet me at 6pm after the course. Here is a link to the gallery's site: http://www.anseladams.com/

I have seen so many people in Yosemite taking pictures these last few days. Many people these days are lugging around these large digital cameras. I have come to learn that most people don't have a clue how to use them. I've seen some of the most astonishing things this last week from people taking flash photos of waterfalls 2 miles away to someone taking hand held shots of an native american story teller in a darkened room without a flash at over a second exposure! On the latter, I offered to the person to fee up my space so they could prop the camera on the display case and get a better picture. She responded that the camera had a stabilizer and her photos would be fine. I have my doubts.

After signing up for the course, we drove to Hetch Hetchey damn for the afternoon. While Antonia and I were roaming around, we were approached by a woman who introduced herself as Edie (short for Edith). She invited us to follow her and take some photos of the falls from the edge of the reservoir. We got to talking and I told her about the course I had just signed up for. Coincidentally, the instructor of the course I was about to take is her best friend and shooting partner! Here is Edie's site: http://littleredtent.net.

On to the course! I showed up at the prescribed time and place and met up with 5 other wanabee Ansel Adams students and Christine, one of the excellent staff pro photographers the Ansel Adams Gallery has on staff. Though I didn't realize this in advance, and it does make sens
e, the goal of this course was to try and teach some of Ansel Adams photographic techniques that he used around the park and to shoot some photos from some of his prime locations around the valley.

The course, though open to everyone, did expect a minimum l
evel of camera knowledge. If I have one criticism, it was that this wasn't made clear to people signing up. Several of the people in the course had absolutely no knowledge of even the basic fundamentals of how the camera's they owned worked, and nor did Christine set out to explain this in the beginning. And thankfully so, the last thing I wanted was to sit through yet another lecture on depth of field. 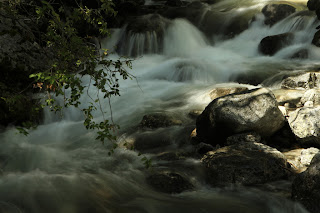 Christine very briefly explained to us Ansel Adams zones system (more on this later) and then took us off to a nearby bridge over a stream with a rushing torrent of water. She explained to us that Ansel Adams loved to shoot in indirect light (things in shade or shadow). She instructed us to set the camera on manual, stop the lens down all the way and see what we could do.

This shot at left was taken at 1/3 of a second at F/16. Not too blown out and really shows the water rushing by. 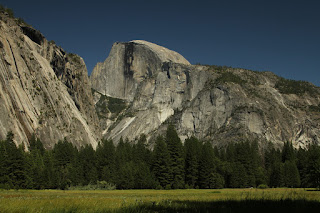 Next we went to the prairie where Ancel shot his famous photo of the half dome with the moon in the background. I shot this rather blase photo.

In order to make things more interesting, Christine recommended zooming in on a particular area and shooting just the patters in the rocks. 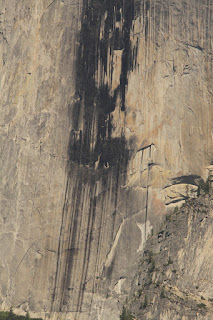 Next Christine took us to a flooded area in hopes of getting a nice reflecting view of the Half Dome. I don't think this is brilliant but it shows roughly what she was trying to get us to do. 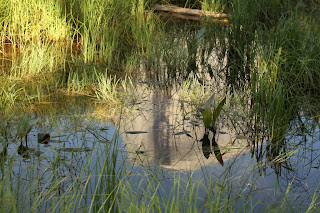 As we were going by another stream, Christine spotted a slight yellow glint off the water. Frankly, I didn't see what she was talking about at first, it was so subtle. She made us set the white balance in our camera to Kelvin and set the temperature to about 9500 and this quite exaggerated images is what was produced. 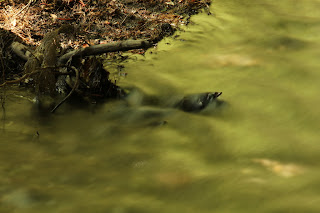 Lastly, she had us photograph Yosemite Falls. The sheer volume of water rushing over these falls was truely impressive (July 2011). 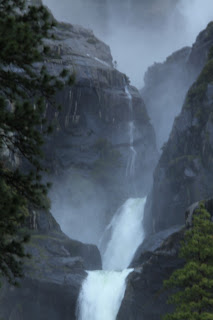 Overall I thought the half-day course was pretty worth the $95. Even though many of these photos were taken quite quickly, I did gain basic understanding of what she was trying to explain to us. I later went back and read up on Ancel Adams Zone system.

Basically, your eye can see about 11 stops from black to white. A digital camera can only capture about 7 stops. Films vary, usually more stops than digital. Each of these stops equates to a zone. Hence zone 0 is total black and zone X is total white and zone V is right in the middle which turns out to be 18% gray. The goal is to set your camera so it captures as many zones as possible. So what one might do using a digital camera, one would spot meter the brightest region of the image and set the exposure 2 stops brighter than normal. Then recompose the photo and shoot. This should capture the detail in the white area without over exposing. (The dark area may be under-exposed, but this is better than over-exposing the whites).

This is not what Christine had us do. What we did with Christine was to just under-expose the scene by about a stop and hope for the best and if the image had over-exposed bits, we'd shoot another shot one stop faster. You can do this so easily with a digital camera which certainly feels like cheating!

After the course, I went over to the shopping center to wait for Penny and Antonia to finish their walk. While waiting, I snapped this cool reflective image in the nearby pond: 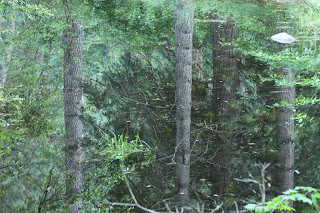