This is probably the most fun I've ever had on a roadtrip. I can't recommend Route 20 between Bend, OR and Yellowstone Park enough, especially for foreign tourists who aren't used to empty American spaces and long straight roads. Nowhere in Europe can you find a single lane road that's this driveable and empty through such wide open country. Just ignore the little bit of interstate near Boise. 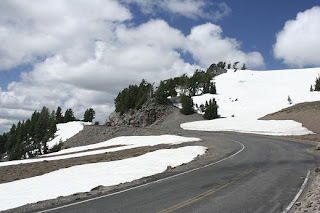 Thursday 14:51, We've already come from Talent to Crater Lake where we had the fun of seeing snow as well as the lake itself. 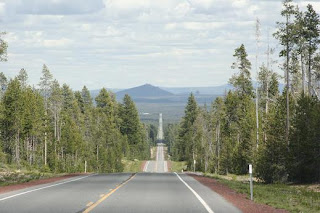 Thursday 15:18, The roads are amazingly straight open, and free of other road users.  On this very stretch of road, about 18 years ago, Mike let me drive his Mum's automatic car, even though I did not have a driving license (shhhh....) 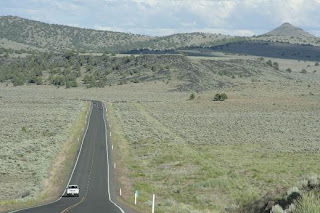 Thursday 18:40, Still open road as we head across Eastern Oregon, but now there are no trees.  I don't know when we've ever made such good time on a roadtrip before. Thursday/Friday night, Our campsite is in a pretty meadow on the outside of Hines and Burns which is the only real civilization for miles and miles.   The campground has a wholesome feel but the counter in the office is covered with Bible verses and the chap who assigned us a place turned out to be from the East Coast near where Mike's dad lives.  He moved out here so he "could stay out of jail", which begs the question: are there fewer opportunities to do things that get you jailed out here or just fewer opportunities to get caught. 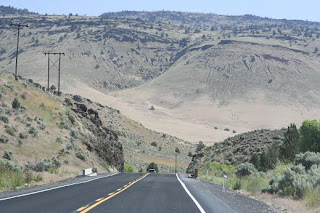 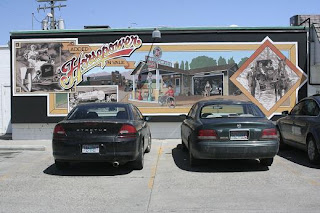 Friday 12:31, Around the town of Vale population densities reach something like European levels and the farmland looks equally dense and prosperous.  We went to the one supermarket in town, and found that they sell saddles in the parking lot.  Since Mike and Antonia decided to picnic in the van, I crossed the parking lot, discovered that the grass lining the car park was made of plastic, crossed a little road into a sort of small picnic area and read the exhibit about the Oregon Trail. I found out that the poor devils on the Oregon Trail really did think that the Malheur river deserved its name, perhaps with good reason.  It's actually quite impressive what the area has become. 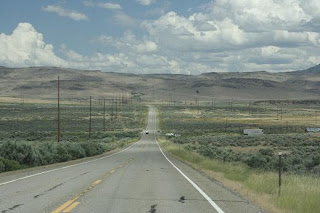 Friday 15:41, Back on route 20 again, and enjoying more big roads.  We pushed on to Craters of the Moon National Monument and made our first camp dinner under rainy skies. 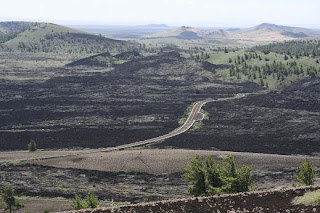 Saturday 11:44, Since for once in our lives we're ahead of schedule, we had time to spend the morning visiting Craters of the Moon.  I'll hopefully do a post about volcanic tourism later. 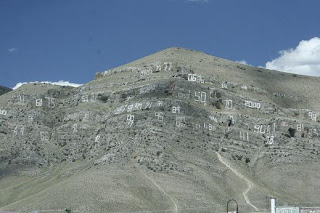 Saturday 14:17, Arco has a strangely decorated mountain. We don't know why. 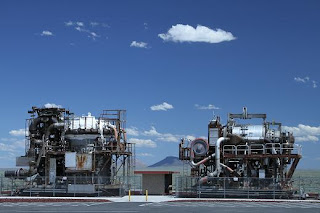 Saturday 18:10, This is some kind of ancient nuclear power station in the middle of nowhere in Idaho, that Mike wanted to visit.. 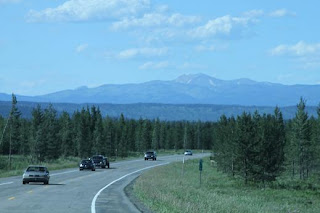 Saturday 20:07, we're nearly in Yellowstone and back in tree country.  We didn't realise quite how tired we were till we arrived and discovered that we were pretty confused about both the date and time, and incapable or responding coherently to people.
at 19:42