Ashland is a town famous for its big Shakespeare festival and my mother-in-law had got us tickets to see Love's Labour Lost in their Elizabethan style theatre.  It's very similar in shape to the Globe in London, but all modern.  It turned out we had very good seats because it rained on and off throughout the show and everyone in front of us got wet.  Love's Labour Lost is one of Shakespeare's more intellectual and cynical plays, before he really got into the flow of being deep and meaningful.  All the same, I quite enjoy it, especially this very professional production. It was well acted, funny and really everything about it just worked.  The people here take Shakespeare very seriously, I have to say.  They have a whole gift shop attached to the theatre, full of Shakespeare fridge magnets and stuff like that.  The lady next to us in the audience was very serious.  She didn't like me whispering plot cues in Antonia's ears, but she made quite a lot of noise herself.  The more Shakespeare was sarcastic and cynical, the more she ooooohed and aaaaaahed and mmmmmmed in ecstasy.  It's not often British humour gets a response like that in these parts, I can tell you.  I came to the conclusion that the whole thing washed completely over her head. 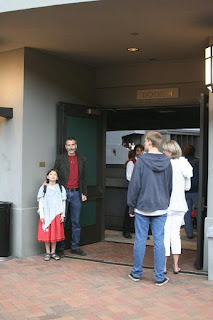 Mike and Antonia going in to the Elizabethan theatre, which we're not allowed to photograph, probably because it's been copyrighted.

My mother-in-law already told me that the people in Ashland were a curious bunch, but I got more confirmation the next day when Mike and I went in to potter around.  There are lots of little restaurants overlooking the creek and Mike and I had excellent pizza on a terrace at Creekside pizza bistro, which seemed to be the local hangout for the goth-type kids.  We wandered around various gift shops and into one that seemed to have been stocked by the most cynical person on the planet after Shakespeare when writting LLL.  It was full of dark humour, often connected with Shakespeare, but also a shop assistant who was well...  people who know Wodehouse will know that when he wants to show that the intended fiancee is a couple of slices short of a sandwich he shows her sneaking up behind someone, covering their eyes and crying 'guess who?'  I swear that is what this shop assistant was doing to her colleague.  When that fell flat she began waving around ridiculous gifts and suggesting that some other colleague might reaaalllly luuurve them.  It was quite a performance and every other shop seemed to have an equally crazy shop assistant in it.  It was as though the whole town was on some kind of drug, and they probably are.  Mike reminded me that this isn't called the land of fruit, nuts and flakes (or bananas, as we say in British) for nothing. 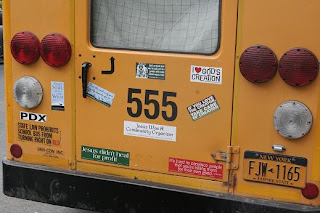