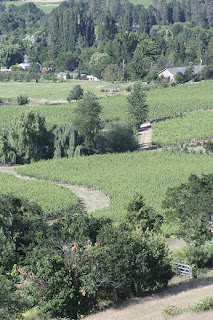 The view from just behind the campervan

We're still hanging out in Talent, Oregon. There was a moment when I thought today's plan was to head to a strip mall for a major shopping expedition, followed by the gun range where I would hold a loaded gun in my hands for the first time ever.  This did not seem like a good idea for someone who feels about strip malls the way I feel about them.  See, what is wrong with the second amendment is that it was written before the invention of major modern stressors like strip malls and traffic jams...

Instead of this, I somehow drifted into cleaning and reorganising the campervan which very much need doing, and took all day.  After a while, I went for a walk and met a guy with two dogs who told we where the best local hikes are, and also that Mount Shasta, some way to the south of here is thought to be one of the Earth's seven chakra points.  He said if you go up there, you run into some pretty interesting people.  I can just imagine a RTW trip for Earth-chakra followers.
at 20:24