Days 96 and 97: Roadtrip from San Francisco to Oregon

OK, I have some advice.  If you would like to drive from San Francisco to, say, Medford, in Oregon, using the Coastal Highway, allow a good two days.  We didn't, so we basically ended up doing most of it in one day, and this is not the best idea.  See below.... 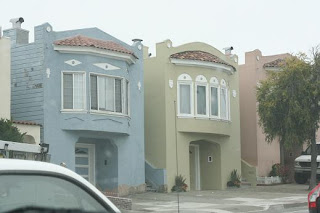 12:54 pm: Mike had to catch up on some work so we left about noon.  Antonia and I are fascinated by these little houses they have all along 19th avenue in San Francisco.  They are like mews with a garage underneath and a flat on top. 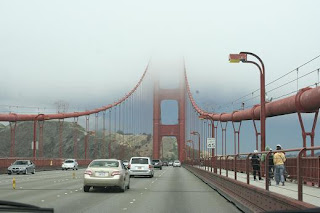 1:07 pm: We crossed the Golden Gate Bridge under some of that shredded floating fog that San Francisco is famous for. 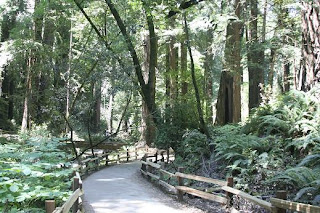 2:39 pm: This is Muir Woods, a National Monument to the Coastal Redwood tree.  We got lost looking for it, so by the time we got there I had reached the stage where I had protected myself from disappointment by convincing myself that it didn't matter whether I was looking at redwoods or a parking lot.  I felt better after a walk and some lunch, but it was crowded here and hard to park (beautiful, though). 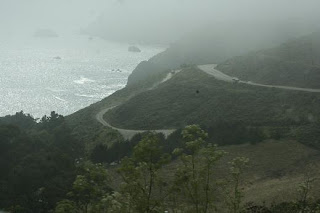 4:51 pm: This is near the start of Route 1, the Pacific Coastal Highway.  It's very attractive and gratuitously winding.  On road like this, we plan to drive nearly 200 miles, plus another 200 miles on slightly faster road.  The fog is already rolling in, as it does on the Pacific Coast as soon as the sun is no longer powerful enough to burn it off. 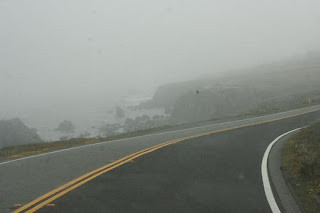 7:15 am: Next morning, it is still foggy and we've just left our campsite in Bodega Bay, where we camped in the fog, to the accompaniement of a foghorn blaring once every 47.5 seconds.  Bodega Bay is about 60 miles north of San Francisco.  We really ought to be in Eureka by now. 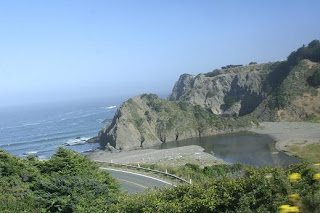 9:23 am: Once the fog has lifted, Route 1 is certainly beautiful. We are starting to look for a beach to stop and eat breakfast on. 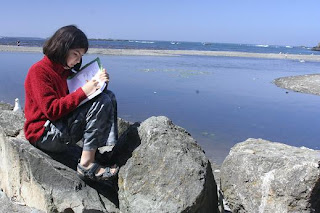 10:45 am:  The only way to really get on the beach here is at the state beaches and parks.  This is the first one we found that was right on the road.  Mike spent the time chatting with some Californians who were testing out their antique campervan.  Antonia is drawing seagulls and making careful notes about their behaviour.  I was guzzling down coffee. 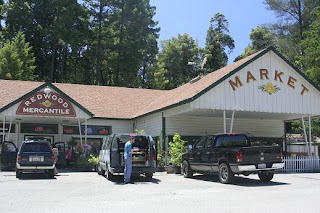 1:21 pm: This is what grocery stores look like out here near the junction of Route 1 and 101. They sell everything: hunting licenses, live bait, 15 kinds of beef jerky, and, since this is California, relatively healthy lunch food.  It was high time we stopped.  I am not used to driving an automatic car on these windy, hilly roads, and the brakes were starting to smoke.  I think I averaged 35 mph, by the way - and nobody was passing me! 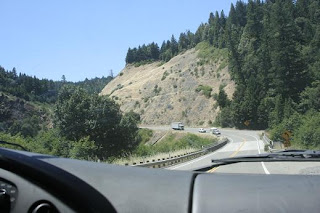 1:50 pm: This is 101, which is a whole lot easier to drive on than 1, and also very pretty. I am trying to nap in the back of the van, Antonia is in charge of photography and Mike is driving. 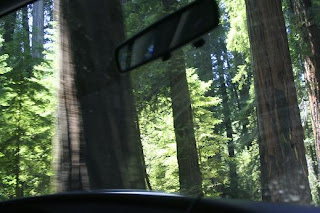 2:02 pm:  Mike told Antonia to photograph some redwoods.  I like all the bits of car that appear in her roadtrip photos because she is so small. 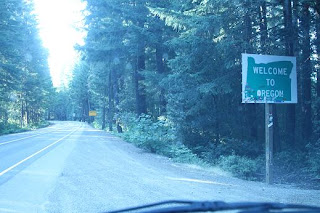 6:57 pm: This photo looks about the way we feel, but it does have one redeeming feature:  it says 'Welcome to Oregon' on it! 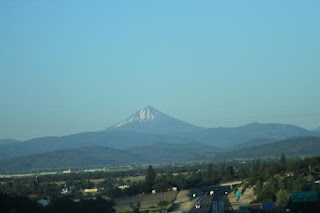 8:21 pm: That's Mount McLoughlin over there in the distance, and more importantly, that's Interstate 5, down in the bottom of the frame.  Boy, were we glad to see I 5.  If it was possible to stop in the middle of an interstate, there would be a picture here of me, Mike, and Antonia kissing I 5. We are ten minutes from our destination and as soon as I arrived I was on the 'net trying to figure out how to drive from here to Yellowstone using only interstates.  I expect I will feel more adventurous in a day or two.
at 22:00