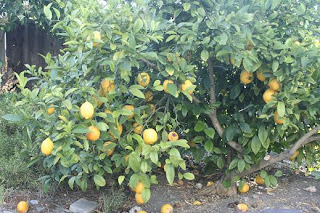 The California dream - a private lemon tree
It was very hot in San Jose yesterday afternoon, but my friend's house has a lovely shady yard filled with lemon, plum and nectarine trees.  Between the cat allergy, the nice yard and me taking being outside at every opportunity for granted, I suppose I made a cultural faux pas.  It turns out our friends rarely or never eat in their yard whereas it never occurred to me to be anywhere else.  Actually, I was feeling so bad from the previous cats I insisted on sleeping on the deck, under the stars, and surrounded by fruit trees.  It was very nice for me, even if I am an eccentric guest.  This morning it turned out I am not so allergic to these particular cats, but I'm really quite glad I didn't find that out straight away. 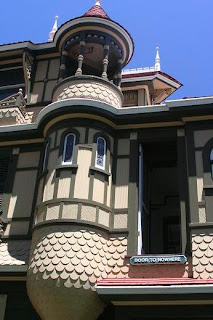 Sometime after breakfast, Mike suddenly said he had been wanting to go to the Winchester Mystery House for ages, and now was the moment!  Well, why not...  My first ever source of information about California was the Alfred Hitchcock and the Three Investigators series of books.  From these, I know very well that California is full of crazy old ladies with far too much money living all alone in astonishingly eccentric architecture.  Mrs Winchester's house is everything I would expect from California, and she may well have been the original model for the cliche.  Mrs Winchester fell into a depression over the deaths of her daughter and husband.  She developed a guilt trip because her fortune was based on the sale of Winchester rifles.  She believed her misfortunes were brought upon her by the spirits of dead people killed by Winchesters.  The only way to appease the spirits was to spend the rest of her life building a crazy house - no matter if it's full of stairs and doorways that lead to nowhere in particular, weird level changes, and whatever else you like.  Mrs Winchester consulted the spirits for architectural advice in nightly seances but she wasn't taking any suggestions from mere architects or craftsmen, so the results are, shall we say, individual. 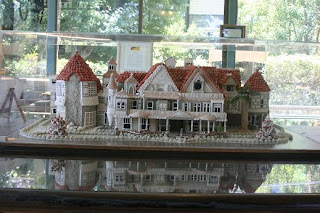 Gingerbread version of the crazy house...
We took the full mansion and behind the scenes tour, which costs $100 for the three of us and kept us busy for nearly 3 hours.  I think that's expensive, but the house was fascinating and the tour guides were very good.  You can't do any self-guided tours except of the gardens.