We are doing things in Mike's freeform, loosely organised way at the moment.  At 2.00 pm we were sitting in Burlingame finishing lunch and discussing whether to go to the San Francisco Exploratorium by Bart (San Francisco area's local transport system).  We ended up taking the van, which is just as well because the Bart doesn't go anywhere near the Exploratorium.  We arrived at 3.00 pm and discovered it was free entrance day, so we had to wait in a very, very long line to end up spending about an hour and a half there because it closes at 5.00 pm.  On the other hand, it was filled with so many people there that as far as I was concerned, each exhibit was surrounded by a wall of sound that I sort of bounced off.  I should say that this is one of Mike's favorite museums in the world, but I don't think I really got the chance to appreciate it. 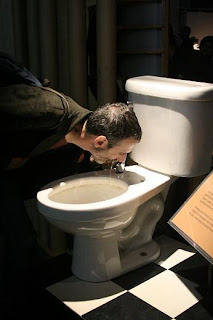 Mike proving that the shape of a drinking fountain means nothing to him in the 'Mind' exhibit.
We paid $20 for Antonia to go in the tactile dome which is a darkened labyrinth you feel your way around.  Meanwhile, Mike and I played with some of the mind exhibits.  We discovered that our communication skills are surprisingly good, despite a tendency to say 'blue triangle' when we mean 'green rectangle'!  I also discovered that I'd better never have to take a lie detector test for real because the little graph goes wild every time I open my mouth, no matter what I say.  That was disconcerting, especially because this other girl I watched was nothing but giggles and externalised emotion - meanwhile, her graph was as flat as a pancake!

Mike planned for us to go to dinner with some friends of his.  I was a bit apprehensive, because the last time we did this in San Francisco, I met one guy who spent the meal boasting about how he smuggled a gun into the UK every time he came over.  I think he thought it was his role to enforce the second amendment internationally or something.  I also met a guy who claimed AIDS was a good thing because it meant fewer African women in the world.  I don't know what he was thinking, but I mostly feel angry with myself for not leaving and going and sitting out in the gutter until Mike had finished with him.  Anyway, this evening's friends turned out to be much nicer and more interesting than that.  We talked about nice things like art and music and San Francisco's latest therapeutic craze: medical marijuana.  Do you shiver in the cold?  Feel anxious about deadlines?  Ever lost your keys?  Perhaps you need a prescription for medical marijuana which you could take in the soothing surroundings of a 'therapeutic salon' (coffee shop, in Amsterdamese!)  Check out the adverts in your local paper, provided you're local to San Francisco.
at 18:13