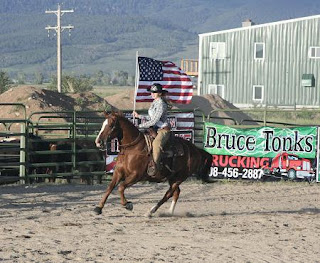 All over the place in the west, I've seen signs advertising rodeos.  There's a rodeo every Friday night just round the corner from our house, so Antonia and I decided to go and see what it's like.  Mike decided he wanted no part of it.  He should have come.  We found a place on the benches next to some people I would have sworn were tourists from the way they were dressed (i.e. not like cowboys).  It turned out they were from as far away as Idaho Falls (1 hour).  The woman was from the area and had dragged her husband along, much against his wishes.  He looked about as comfortable as a cat on a hot tin roof.  Mike and he could have commiserated together.  He kindly explained some of the events to me anyway, but he really wanted to make sure I knew that the people around here aren't quite the primitive rednecks he thought they were making themselves out to be by participating in rodeo!  He told me there is a lot of wealth and nuclear technology going on in Idaho to counteract the impression I was surely forming.  I tried to let him know that in the South of France where I grew up, we have no problem at all combining engineering expertise, bull games, and thinking ourselves reasonably sophisticated, but that idea seemed to be too far away from his own for him to even register it. 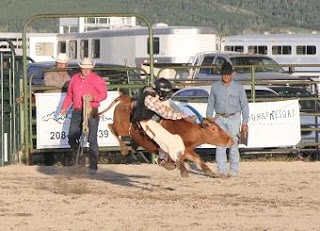 The kid riding here is about 12.  He did really well, but the calf caught him in the stomach with its hoof after he was down.  People do get knocked around in this sport.

Actually the rodeo games are not quite like our 'course libre' (where teams of men try to remove a ribbon from the bulls horns, for those who don't know).  For one thing, there is a lot more waiting around between the action.  Small town rodeos seem to be family events with lots of kids competing.  There's something for everyone and it seems a great way to bring people together.  The events go like this: 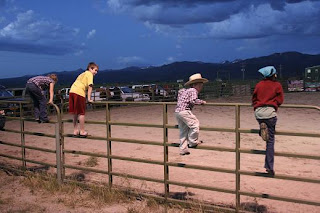 A line up of prospective cowboys and cowgirls

There were a few other things after that, but we'd already stayed two hours and needed to get home to get up early for a hike the next day. We both had a fabulous time.  I had to lasso Antonia, throw her on her back and tie her ankles to get her away (just kidding!).

Other sporting events in the USA
Basics of rodeo