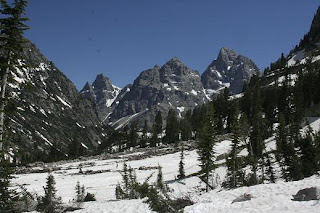 The end of the road in the Tetons.  This is where we had to turn back...

I believe in planning, and right now we're experimenting with officially planning our days. So yesterday, we set off to do a 13 mile hike to Lake Solitude in the Grand Tetons but just failed to reach our goal due to lack of planning. Ooops!  Here's all the things we should have done. I could imagine they're obvious to everyone else, but just in case.