Days 103 to 108: Volcanic and geothermal tourism in the US

The desert parks of the south-western United States are so well known internationally, that it's a little bit strange that the north west isn't equally well known for volcanic and geothermal tourism.  Except for Yellowstone.  Mike and I have done a lot of volcano tourism around the planet, which puts us into a position to make comparisons, so I think I'll deal with Yellowstone first. 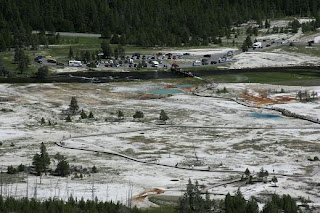 Looking down over Biscuit Basin

In terms of what we've seen, Yellowstone is only just interesting.  For example, we saw Old Faithful go off, and it was very pretty, but even Antonia remembered that it was not as impressive as Strokkur (I think) in Iceland.  She said so in quite a loud voice as well, which wasn't very tactful of her.  I could feel the people all around us having palpitations.  As for the colored pools and bacterial mats, they are nice enough, but they are a long, long way from being as impressive as the ones we saw in New Zealand. In Yellowstone, there are also far too many boards around, telling you that the thing you're looking at was quite impressive in about 1870, but is now a dud.  I can always look at more volcanic activity quite happily, but so far, seeing a real live bison has been the most exciting event for me. 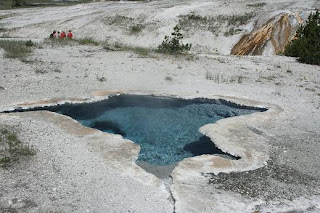 Given that Yellowstone rates a B- in terms of geothermal activity, it's a shame that it's quite so much of a pain in the rear to visit.  It's absolutely a circus here in July.  You have the opportunity to stand in a traffic jam caused by people who have left their cars in the middle of the road to go and photograph a grizzly bear on the verge.  You can watch people destruct test their children by seeing if they can navigate a narrow boardwalk between two boiling hot geothermal pools without falling off (they can't). You can hang out in the Yellowstone Inn of an evening listening to people sing the lowest common denominator of song around the piano.  The rangers here are the least friendly and helpful of any park we've been, probably because they're confronted with the reality of having to process thousands of people who are just passing through.  The Yellowstone Inn has fascinating architecture, but as everyone says but it's also a pretty rough and ready place to have to stay.  It's staffed by overworked kids fresh out of high school on their summer holiday jobs, and the least expensive rooms are really just about hostel quality at $99 a night which turned out not to include room service.  The best thing about the Yellowstone Inn was the restaurant.  The bion ravioli, antelope sausage and everything else I had were amazing, though as at Yosemite, the portions, prices and speed of service are European style. 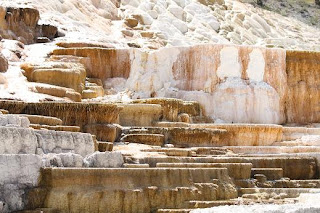 
We have mostly been concentrating on the scenery, which I'll hopefully post about tomorrow. 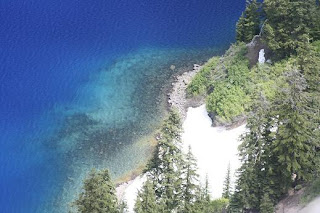 Volcano tourism in Oregon is a lot more fun.  Crater Lake can also be a bit of a madhouse, but it's a small park and you would tend to only stop by there for a half day on the way to somewhere.  It really is extremely beautiful and worth a little detour (maybe not a huge one).  The first time I went to Crater Lake, Mike and I drove on and spent a whole weekend visiting the Newberry National Volcanic Monument near Bend.  That's where I went down the very best lava tunnel I've ever been in, Lava River Cave, about a mile into the ground, with the help of some very old-fashioned kind of fuel-based light.  I wonder if they still do that?  This was my first ever volcano tourism trip, so maybe I've become jaded in the meantime, but I have very fond memories of it, and there are a lot of things to see in Oregon and Washington state that I haven't seen yet. 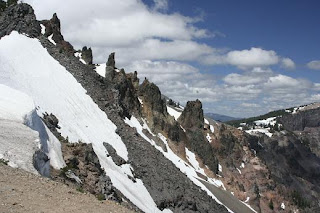 The Devil's Backbone, on the edge of the crater

Craters of the Moon, Idaho 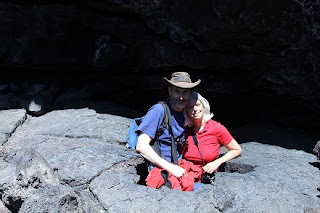 Mike and Pen emerging from a lava tunnel

On this trip, we stopped at Craters of the Moon National Monument in Idaho off Route 20.  Not only did it have a pleasant campsite, a reasonable number of people and ultra-friendly and helpful rangers, but it was enjoyable volcano tourism in a small scale way.  You can see a lot of different and interesting things here in a full day: go down a small lava tunnel, climb a small volcanic cone, traipse through a lava field.  We only had half a day, so we even had to be selective.  It wasn't quite a monumental as being up near Myvatn in Iceland, but it was a nice enough place to be that this wasn't a problem. 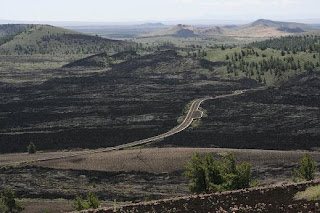