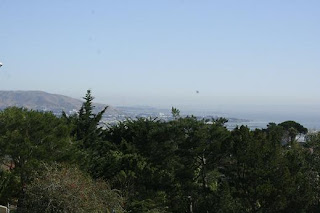 Another nice view, of San Francisco bay, this time...
It's just as well for us we've returned to civilization after our stay in the wilds of the desert and Yosemite because we have a few things to take care of.  Sometimes, in doing this, you learn more about local cultures than by visiting monuments and parks.  I learned: