Day 110: The joys of a home in the Grand Tetons 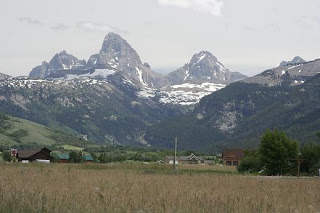 The view from the road outside our house

When I was planning this trip, I really wanted to spend time in Yellowstone, and coming to the Grand Tetons was a second choice because Yellowstone was just too full.  Beyond that, coming to the Idaho side of the Grand Tetons was a second choice, because the Wyoming side is very expensive.  Well, boy did I get lucky!  Just the drive through the Tetons was more impressive and beautiful than anything Yellowstone had to offer.  Then we arrived in Jackson, which although it is touristy, is at least a real place and not one of those artificial National Park villages.  Finally we arrived at our 'cabin' in Driggs which Antonia promptly announced was the best place in the world apart from our own home in France.  I can see her point.  Firstly, for a cabin, it's so big I have no idea where the other two are right now, which has its upside after spending about 4 weeks sharing rooms and a campervan.  Secondly it's full of all kinds of fun and interesting things selected by someone else.  I can't help a secret wish that it would rain for a week so I would have an excuse to spend all day watching someone else's old James Bond movies and reading their books.  Thirdly, it has lots of essential facilities.  For example, every stitch of clothing I own is currently in the washing machine, so it's absolutely essential that there should be a hot tub for me to sit around in until I have something to put on!  The fact that the hot tub has this little tablet thingy where I can rest my laptop is a bonus.  So really, we all wish we were staying here longer than a week, but as it was a bit steep for our budget in the first place, so we'll just have to make the most of the time we've got.

As a town, Driggs is even more real than Jackson.  It's touristy enough around here that there are lots of nice facilities, but it's also a place where people live.  Last night, we didn't have time to go food shopping so we ended up in Teton Thai, the most amazing Thai restaurant we have eaten at in a long time.  Apart from the food being excellent, it's one of the few American restaurants I've been to in which you can hold a conversation without yelling even when it's full. You can order food with a spice level ranging from 1 to 5, so we ordered 5.  They were not kidding when they said it would be spicy.  I was in heaven (though inevitably I had to die first in order to get there)!  Antonia ordered Pad Thai without any spice, ate half of it, then told us she found it quite spicy.  Mike agreed with her and mentioned it to the waitress, so they gave us a whole new Pad Thai even though it's not as if we had failed to eat most of the first one.  So, it seems the people around here may also be nice beyond the call of duty as well... not like in Yellowstone, let me tell you.
at 03:02